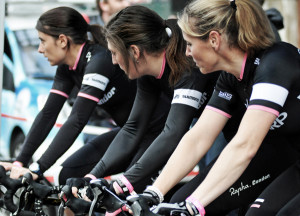 Tracy Corbett is a Level 2 British Cycling Coach, Level 3 REPS Personal Trainer. Trained  First-Aider and has been CRB,DBS vetted. Tracy has over 25 years experience in the fitness world.

Tracy is passionate about all sport, and represented Wales in lightweight rowing. In 2006 Tracy went on to achieve a Commonwealth bronze medal, followed by 3 times gold medals at Henley Regatta and numerous National Champion and International wins.

In 2008 Tracy decided to switch focus from rowing, and concentrate more on road racing. In 2009, she raced with the Rapha Condor Women’s race cycling team in London. The team of 8 competed Nationally and Internationally and 2 of the team went on to represent Great Britain alongside Olympic medalist Nicole Cooke’s Team in Belgium.

In  2014 Tracy joined Les Filles Queen of the Mountains Race Team which is a local domestic team that loves to compete at races, eat cake, and generally has loads of fun on and off the bike.  Even with Tracy’s busy lifestyle, she still loves to race and compete on road!